Where nature meets in a serene setting...at the Wilderness

"Far Niente", a 5 minute drive from the Wilderness green with its post office, hotel, garage and shops, is the ideal central point of the Garden Route from which to make daily excursions to historic, scenic and pleasure places of interest. Within a radius of +- 50 miles there are the world-famous Cango Caves and ostrich farms near Oudtshoorn.To get there one has the choice of travelling at speed over the majestic Outeniqua Pass, or at leisure over the beautiful historic dirt road of the old Montague Pass, over which ox wagons used to take weeks to traverse.

There is the necklace of the Seven Vleis and Serpentines forming the incomparable Lake District, including the Wilderness and Knysna Lagoons, alive with fantastic bird life along the waters, apart from the sanctuary itself near the hotel.

Beautiful, serene black water rivers abound: the Touws River with its King Trail and its source, the silent "Ebb and Flow" in the heart of the forest; the Silver River on the old George-Knysna Road, the latter a lovely leisurely drive away from the main traffic. There is the famous "Big Tree", the giant of the Knysna Forest; Knysna itself with its heads, through which the ships passed into the harbour in the early days; the tiny little church in the main street, the antique and stinkwood and craft shops; a little further east are the famous beaches of Plettenberg Bay.

Turning 2 kilometres west of "Far Niente" is the coal-black Kaaimans River with its gigantic bridge across part of the ocean and the waterfalls in the gorge - a veritable river Styx; also the Swart River; further on is Victoria Bay (a pleasant walk along the railway line) - a surfer's paradise; and then only 9 miles from "Far Niente" is George itself, with the towering mountains behind it, the gorgeous gardens, wonderful golf-course and international airport. Along the coast towards Mossel Bay are smaller bays to visit, e.g. Herolds, etc.

Last, but not least, for angling addicts there is always surf and rock fishing - from in front of the house, or for the rockists, the fishing is particularly good from the other side of the Kaaimans River mouth.

Lest we forget the bowling fraternity, players will be ever-welcome at the club adjoining the hotel.

"Far Niente", the thatched-roofed house with the Constantia gable, has become a landmark at the Leentjies Klip end of the Wilderness beach. In its six decades of life it has survived floods, tidal waves, landslides and four generations of hectic, boisterous family life.

Built at the height of the great depression in 1933 by Dr. Johannes van Schalkwijk and his wife, Estelle (a well-known Eastern Cape landscape painter), the house was isolated in those early days, surrounded by thick forest. Building at the Wilderness was a hazardous operation at that time, as all the land was owned by a private company. The manager, known locally as "Mussolini", could cut the water supply without reason or notice, and often did, which increased the cost of building. All water came from the "Ebb and Flow" at the source of the Touws River and the pressure was very low at the best of times. There was no electricity either. During heavy rains, the road to George was impassable, and one had to use the old Knysna road above Fairy Knowe to join the main road much further on. This was an enormous detour, although a beautiful drive, and often entailed tyre chains to get through the red mud. Supplies usually came by train, although even this route was often impeded by landslides.

The erection of the house was not simplified by Estelle's insistence on the Constantia gable. The architect threatened suicide after being forced to replace it twice, because the proportions, according to Estelle, were incorrect. The original house comprised a large living-room, three bedrooms, a small, dark kitchen and servant's room, and a bathroom and separate toilet. A shower was built outside so the bath was seldom used. The children often slept on the two small verandas under dassie karosses which kept out the damp and rain. Later on as the family grew, tents were set up. The house became a magnet for the four daughters, grand and great-grandchildren as the years advanced, and no holiday was ever without friends and friends of friends. At one time the old kitchen catered for twenty-five mouths at a time. Meals were cooked on a coal stove and usually eaten on the verandah or on a table under the milkwood tree. Then, to ease the congestion, a large new kitchen (the present living-room) was built, with a maid's room underneath. This gave the family two small extra bedrooms.

Before this expansion, however, the house was in danger of being swept away by a combination of spring-tide, gale-force wind and a deluge of rain. Estelle was alone at the house with the children, and as the waves reached the steps of the verandah, she tied a heavy rope to the supporting pillar and threaded it through the windows to fasten it round a large tree on the road side. Whether this saved the stoep is a moot point, but several beach front homes had their fronts cut off by the sea like a slice of cake. Old folk living at the top of the hills stated that this phenomenon occurred about once every 50 years. After this scare, Dr. Van started building his famous dykes. The name of the house (which means "Doing Nothing") was for him a complete misnomer, as he was always working at something. Every holiday he would dig a new trench, and every toddler, adult and guest had to cart stones up from the beach after every swim or walk. These were thrown in the trench and filled up with cement.

At one stage the house was on a peninsula, as the kloof behind became a torrent after rain, and swept all the soil away into the sea. Fortunately the Divisional Council built a retaining wall there for their parking area, so that only two sides had to be protected.

When Geoff Pallister (grandson and engineer) acquired the house in the early eighties, the first thing he did was to build a high retaining wall along the whole front, then extended the terrace, which originally had been only three metres wide. When he had to rethatch the roof, he was inspired to change the loft above the bathroom and passages into a dormitory for the girls. He supervised the thatching himself with a band of thatchers and then constructed a wooden platform for the dormitory, with built-in bunks and cupboards, and a window facing the road. This took some ingenuity to design as a narrow staircase had to be built into the passage.

As the family at Christmas continued to grow, the latest alterations were added, which transformed the old house. The family kitchen is now the living-room with an open-plan modern kitchen, complete with all appliances. Three extra rooms and new toilets, showers, baths and basins have been added. Half of the original house is now a flat occupied by permanent tenants who also manage the letting of the house.

All these mod cons are a far cry from the old coal stove, gauze meat-safe, galvanised iron bath for the washing, candles and paraffin lamps and primus stoves, iron beds and stretchers on the verandas - but the ambience of a family home remains unchanged with its tradition of hospitality to all and sundry. The lovely view of the bay is still the same that Estelle painted so many times in all its moods; her aloes still bloom on the terrace in winter; the milkwoods with their dark mystery still brood at the back; and the old house, still known to many as "the old Van Schalkwijk house", is still a magnet for family and friends and for strollers along the beach, who gaze spell-bound up at the gracious gable silhouetted against the mountain.

No one has ever died in Far Niente, but if there are any ghosts floating around, they would be Dr. Van building his dykes against the sea, as his forefathers did in Holland, and Estelle with her sketchbook, gazing out at the ever-changing sea as her sailing forebears did on the island of Jersey. 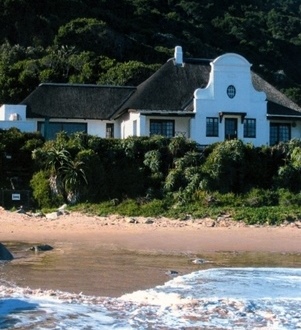 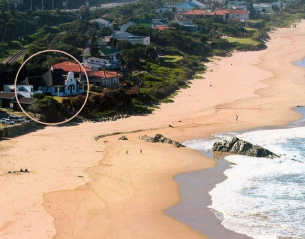